‘The man for the job’ says Ferris 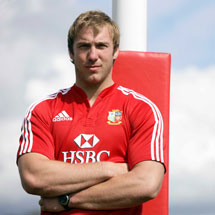 Ulster’s 2009 Lion Stephen Ferris is backing his fellow Irishman Paul O’Connell to make a real impression as squad captain on the forthcoming tour of South Africa.

Ferris, who played in the same pack as O’Connell during Ireland’s first Grand Slam since 1948, believes the Munster second row has just what it takes to succeed in the most sought-after position in British and Irish rugby.

What’s more, the 23-year-old flanker claims he has already learnt a great deal from his countryman and says he expects more of the same during the 10-match tour of the Republic.

"He’s done a fantastic job with Munster and he’s captained Ireland on a few occasions.

"I”ve a lot of respect for Paul and I wish him all the best with the captaincy. I’m sure he’ll not let the British & Irish Lions down at all.

"He’s a massive player and playing alongside him for Ireland I’ve learnt so much off him over the last few months and hopefully that will stand me well when I put on a Lions shirt.

"He’s definitely the man for the job and if I am there beside him I’ll be supporting him all the way."