Tom Shanklin hopes to put the disappointment of 2005 behind him by pushing for a Lions Test spot this time around. [more] 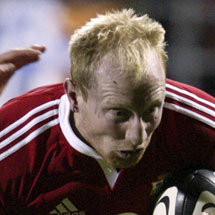 Tom Shanklin hopes to put the disappointment of 2005 behind him by pushing for a Lions Test spot this time around.

The Wales centre saw his Test hopes dashed by injury four years ago and the 29-year-old is determined to make up for lost time this summer.

"I came back disappointed in 2005 because of the injury,” said Shanklin, who damaged his knee prior to departure for New Zealand and was eventually forced out of the tour in the lead up to the first Test in Christchurch.

”I started the tour well but the knee became too painful and meant I couldn’t get involved in the Test set-up – I hope to make amends in South Africa.”

Shanklin was among most people’s ‘definites’ for the 2009 tour but the Blues star says selection in a second successive Lions squad is even more of an achievement than it was first time around.

"It was great to go on one tour but to be selected for a second is extra special – it’s a brilliant feeling,” added the former Saracens player.

"But I want to get in the Test team and that’s the next goal – I won’t be going there to make up the numbers.

"It will be tough because Brian (O’Driscoll) was the player of the Six Nations – and deservingly so.

”I had a slow start to the season but I found my form around the Six Nations and felt I was playing at a decent level of rugby. It’s all about peaking at the right time."

Shanklin has certainly been doing that in recent weeks as his regional side continue their hunt for a domestic and European double.

With the EDF Energy Cup already secured, the Blues face Leicester Tigers in the Heineken Cup semi-final at the Millennium Stadium on Sunday, with Shanklin looking for another win and to stay injury free ahead of departure for South Africa next month.

"The Lions takes a back seat for the time being because hopefully we’ve still got some big games left to play.

"I just need to stay injury-free and make sure I’m on the plane. It will be a nervous month ahead."