Springbok prop Gurthrö Steenkamp will go into this summer's Lions tour knowing uncertainty regarding his playing future has already been resolved. [more] 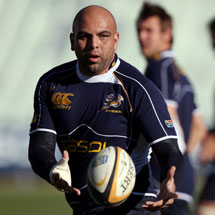 Springbok prop Gurthrö Steenkamp will go into this summer’s Lions tour knowing uncertainty regarding his playing future has already been resolved.

The 27-year-old will face the three-match series with Ian McGeechan’s men in confident mood after the Bulls confirmed they were delighted to tie him to a further two-year contract.

Steenkamp is expected to play a prominent role in the Boks’ matchday squad and his team manager at the Bulls is delighted that he will be staying with the Pretoria-based outfit beyond the current season.

"I think Gurthrö is one of the best loosehead props in world rugby and he has the ability to deliver the goods in each and every game that he plays," said Wynie Strydom.

"He plays his heart out in every match and on and off the field he is a great team player.

"He is one of our senior members who plays a leading role in the team and he always motivates and inspires the youngsters.

”In my opinion he is the ideal teammate and his signing is great news for everybody in the Bulls’ family."

A World Cup winner in 2007, Steenkamp now has 20 international caps to his name and his current form suggests he will add to that when the Boks take on the Lions in Durban, Pretoria and Johannesburg.

With may people suggesting he is playing the best rugby of his career, the Paarl-born prop did not need much persuading to remain with the Bulls.

Steenkamp has been with the side for the past five years and will now remain a Bull until at least the end of 2011.

"I love the team’s culture and playing in the light blue jersey is a huge honour,” explained Steenkamp.

”There are wonderful structures in place at Loftus and that played a big part in my decision.

"I joined the Bulls at the end of 2004, but a wrist injury kept me on the sideline for 18 months. With my injuries woes I could only play one match in two seasons but the Bulls continued to back me and they never stopped believing in my abilities.

"They had the opportunity to release me, but they supported me through the dark days and that meant a lot to me. They always showed faith in me while I was busy with my rehabilitation and I will always be grateful for that."