HSBC call for a different kind of Lions support

HSBC, Principal Partner and shirt sponsor of the 2009 Lions tour, is calling on fans who are travelling to South Africa this summer to get on board with their emerging schools rugby programme. [more] 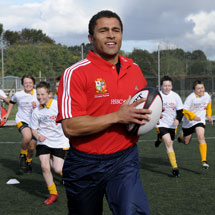 HSBC, Principal Partner and shirt sponsor of the 2009 Lions tour, is calling on fans who are travelling to South Africa this summer to get on board with their emerging schools rugby programme.

Over the past few months, 40 schools from the HSBC Rugby Festivals have been twinned with 40 schools in South Africa through a kit collection programme.

Children in England, Ireland, Scotland and Wales have been busy collecting unused rugby kit which is being delivered to children in South Africa during the 10-match Lions tour.

HSBC is working with SOS IRB Kit Aid to collect the kit and all items are needed from full sets of jerseys, to clean rugby boots, to shorts and t shirts.

HSBC ambassador and double Lions tourist Jason Robinson has called on the thousands of fans who are expected to go and support the Lions to dig out any unused rugby kit and bring it with them.

“Even if it is just a t shirt or a pair of boots that don’t fit any more, we want fans to bring it over to South Africa with them and donate it to our kit collection programme,” said Robinson, who was a Lions Test player in 2001 and 2005.

“There are so many children there who love playing rugby but who don’t have the equipment or kit to really enjoy it. The kit that has already been donated has been so warmly received, but there is always a need for more.

“We are trying to ensure that the legacy of the Lions tour lasts longer than just the Test matches and this is a great way for fans to get involved.”

Fans who wish to donate items to the HSBC kit donation scheme are asked to bring items to one of the collection points in Durban and Johannesburg. These will be open in the Southern Sun Hotel in Northbeach, Durban on the weekend of the first Test match (Friday June 19 – Sunday June 21) or The Radisson Hotel, Sandton, Johannesburg for the second and third Test matches (Friday June 26 – Sunday June 28 and Friday July 3 – Sunday July 5).

All the kit collected will be donated to one of the 40 schools already identified in South Africa.