Earls looking to take next step 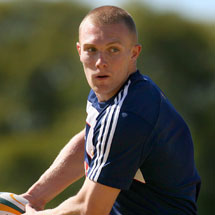 The 21-year-old has been handed a gilt edged chance by Lions coach Ian McGeechan to shine in the first game of the tour against a Royal XV in Phokeng on Saturday.

He will be one of eight newcomers to the Lions heresy in the starting line-up, but O’Connell isn’t worried about the least experienced member of his 37-man squad.

“It’s going to be an incredible day for Keith. I’ve known him for a long time since he was a young fella,” said O’Connell.

“He’s done really well since he came over here and what I like about him is he is massively enthusiastic. For players like me, it is great to see the young guys with no fear, no worries.

“They just have to go out and play and enjoy themselves and, the more they do that, the better they will play.”

As for Earls, he can hardly believe what has happened to him this season. He won a Magners League title with a Munster team he thought he would be lucky to break into, scored a try with his first touch in international rugby for Ireland a stones throw from his house at Thomond Park and then got selected for the Lions.

He will form a ‘little and large’ centre partnership with the Cardiff Blues and Wales juggernaut Jamie Roberts at the Royal Bafokeng Sports Palace and can’t wait to pull on the Lions jersey.

“Not in a million years did I think I’d be going on a Lions tour, yet here I am in Johannesburg preparing to play in the first game on the 2009 tour.

“It’s a dream come true. I haven’t even played a Six Nations game yet, but I’ll become a Lion on Saturday.

“My goal at the start of the season was just to get a few starts for Munster, and not even become a regular. And there were no thoughts about possibly playing for Ireland this quickly – it has been an incredible season.

“I’m probably the wild card in the party. My aim is to train hard and give myself the chance to play in a Test match.
“There are good players around, like Brian O’Driscoll and Jamie, and I know it’s going to be tough. But I’m here to give it my best shot.
“My Dad has been on the phone and his advice was to go out to play my own game and relax. Just treat it like a week-in- week-out game and enjoy it.
“I got my first cap for Ireland at home in Thomond Park, which is only a stones throw from my house. Playing for your country is the pinnacle for any player, but to be picked as one of the 37 best players from the Home Union is amazing.
“The Lions is such a massive thing, especially here in South Africa. So much has happened now in my first season I just can’t believe it – and I’m on a Lions tour.”