Riki Flutey is all set to finally get his British & Irish Lions career up and running this week after burning the midnight oil to recover full fitness. [more] 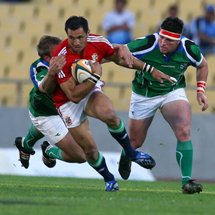 Riki Flutey is all set to finally get his British & Irish Lions career up and running this week after burning the midnight oil to recover full fitness.

At one stage, admitted the Lions’ head doctor James Robson, it looked as thought the London Wasps and England centre could be on his way home after injuring his knee in the opening game against the Royal XV.

He had come onto the field as a 67th minute replacement for Keith Earls and picked up his injury in those unlucky final 13 minutes.

“If you went back to 1997, then Riki would have been on his way home. I really thought he was going to be the first player to leave the tour,” said Dr Robson.

“But he has been setting his alarm to wake himself up every two hours in the night to administer cold therapy on his knee. That’s on top of the work he is doing with the physios throughout the day.

“He will resume full training tomorrow and be available to play on Wednesday if required. It means we can say the Lions are in rude health at the moment.

“The medical team has been very busy, but we only had a dead leg, slight hand and knee injuries to deal with after Saturday’s game.

“We have all bar one player fit and available for selection at the moment, Martyn Williams. He took a blow on his shoulder, but if this was the last game of the tour on Wednesday I’m sure we would be making him available.”

“I can’t remember at this stage from any previous tour I’ve been on going back to 1993 where only one player was unavailable for selection.”