Gatland compares Lions to All Blacks

Warren Gatland has paid his British & Irish Lions players the ultimate compliment by comparing them to his native All Blacks. [more] 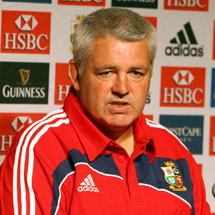 Warren Gatland has paid his British & Irish Lions players the ultimate compliment by comparing them to his native All Blacks.

The former Ireland, London Wasps and now Wales coach played for the New Zealand side 17 times without getting a Test appearance. But he toured with them across the world and brought their high standards to the northern hemisphere with him.

“This is the first time since I’ve been in the northern hemisphere that anything has reminded me of being in an All Blacks camp,” said Gatland.

“There is a lot of tradition with the Lions and the players are fighting for a position in the Test side – a lot of things have reminded me of training with the All Blacks.

“You are dealing with the best players from the northern hemisphere and there is a huge weight of expectation from Four Nations on their shoulders. It is the pinnacle of these players’ careers to pull on that Lions jersey and I’ve experienced that first-hand with the All Blacks.”

Wednesday night’s victory made it four from four for the Lions and forwards coach Gatland was pleased with both the outcome and the performance. But there are still things to work on before next week’s first Test and the Lions are keeping a few tricks up their sleeves until 20 June.

If the on-looking Springboks felt they were learning a few things about their opponents last night, Gatland revealed that his players were deliberately leaving certain moves on the training ground ahead of the Test series.

“I’m very pleased with the way the team is gelling together. The players have been working hard and coming to terms with the systems and structures,” added Gatland.

“I didn’t realise until we assembled how difficult it was going to be to blend players together. Now we feel we are getting better and stronger

“We have got to be prepared to go the full 80 minutes against the Springboks. If we get into a power game we are going to struggle.

“I think Peter de Villiers has seen a Lions team that is improving with every game. We have kept a few things up our sleeves with a few variations we’ve worked on in training.

“You don’t want to show your whole hand before the first Test, but then you ensure you don’t leave anything on the side when you get the chance.”