What they said about the latest Lions victory

Ian McGeechan was 'very pleased' and Sharks coach John Plumtre was 'very impressed'. Read on to find out what they all thought about the British & Irish Lions' record win over the Sharks in Durban. [more] 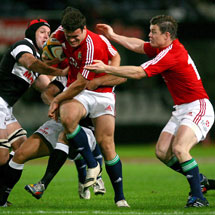 Ian McGeechan was ‘very pleased’ and Sharks coach John Plumtre was ‘very impressed’. Read on to find out what they all thought about the British & Irish Lions’ record win over the Sharks in Durban.

“We knew we just needed to keep on working, not to panic and to keep building a performance. We reaped the benefits in the end.

“The important thing is the understanding that is coming through everybody. That is one of the strengths of doing everything together.

“But you don’t get carried away with things. We know the Test match is going to be another game at a completely new level. We have to build a confidence and structure we are happy within our own game.

“We have to keep our feet on the ground about what’s going well and what we still have to look at. Our discipline and patience tonight were very good. We finished the game very strongly which shows the players are enjoying playing with the ball and without it which hopefully gives us a chance.

“There were 13 turn overs and if we can keep it around that mark it generally reflects a pretty good performance. There will always be some – some are from kicks and not just the tackle area. If we can get down to around the 10 mark we won’t be in bad shape.”

“I’m sure they will still be a little bit concerned about the breakdown because they turned over a few balls, but they aren’t far off from being a pretty complete side. I’m not sure if that was their Test side, but it certainly wasn’t far off their Test pack.

“They took us on in the first-half and our boys took care of them, but they changed things in the second-half and we couldn’t live with them.”

“We defended superbly well and it was a very tough challenge. The fact we didn’t concede any tries was very important to us. We all come from different defensive systems and to only concede three points against such an established rugby franchise as The Sharks was brilliant for us.

“We had a lot of possession in the first-half but didn’t convert it into points. The pressure told in the end and we got some scores in the second half.

“One of the good things about the game was that we trusted each other. It would have been very easy for the team to get frustrated because we had a lot of territory and possession but didn’t get any points in the first-half.

It was a very good sign that we stayed very patient and relaxed with each other and stayed on the job. That was a big step forward for us.

“There is a very good spirit and bond in this squad.”

“It was frustrating in the first-half. We got over the line, but couldn’t get the ball down. We had to keep our patience and our shape and it came right for us in the end. You have to earn the right to go wide sometimes and that’s why we worked through the Sharks first.

“We couldn’t convert the territory and possession we had into points to begin with, but in the second half we got that early score and then settled into a good performance.

“Rugby is all about speed of ruck ball. We will continue working on that and we are trying to improve all aspects of our game.

“There were some very pleasing parts to our game tonight, but there is still plenty to work on.”

MAN OF THE MATCH – MIKE PHILLIPS

“I loved every minute of it. It was a massive effort by the boys, especially the forwards. It was great as a scrum half to play behind that pack and our forwards dominated.

“We played very well in the second half and opened things up nicely. I was delighted to get a score because I don’t score very often, but there were far better individual performances than mine out there.

“We are all working hard in the games and on the training pitch. We are improving with every game.”

“Both packs went for each other and the Lions have a strong set of forwards. We were competitive for 60 minutes but then made a few mistakes which a quality side like the Lions pounced on.

“They have an offensive defence which is very good. They put you under a lot of pressure, which is something we don’t experience in the Super 14.

“Their line-out was also very good and we couldn’t get our hands on the ball.”