Lions legends case out the ABSA

If Springbok coach Peter de Villiers had been walking around the ABSA Stadium in Durban today he may have thought Ian McGeechan was pulling a fast one ahead of Saturday's first Test. [more] 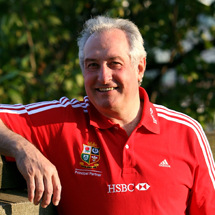 If Springbok coach Peter de Villiers had been walking around the ABSA Stadium in Durban today he may have thought Ian McGeechan was pulling a fast one ahead of Saturday’s first Test.

For training on the fields surrounding the Durban venue were three of the greatest British & Irish Lions, Gareth Edwards, Gavin Hastings and Jason Robinson.

And for good measure a fourth legend, current tour manager Gerald Davies, was also in his tracksuit.

But with three days to go to the start of the three Test Castle Series, it wasn’t a late ploy by McGeechan to spook the Boks, merely the latest stage in HSBC’s Community Programme.

As Principal Partner of the British & Irish Lions Tour, HSBC has undertaken a major TAG Rugby programme involving 4,000 children across South Africa. Gareth, Gavin and Jason, all multiple-Lions, helped to coach 100 children from the Durban region at the fifth HSBC Rugby Festival staged in South Africa during the Lions Tour.

"Today has been a real pleasure. The children were so enthusiastic and seemed to really enjoy their rugby. What a tremendous way to spend time as we approach the first Test match this weekend," said Gareth, who was part of the 1974 Lions winning side in South Africa.

Many of the children had to get up at 4.00am to heads off for Durban, but they thoroughly enjoyed their day out and thanked the Lions legends by singing them some special songs.

”It was wonderful being here today and seeing the smiles on the faces of the children. It has been very special," said Gerald, who was a team mate of gareth’s on the 1968 and 1971 Lions tours.

All four legends took part in coaching and skills sessions with the children, many of whom were playing rugby for the first time.

Giles Morgan, Group Head of Sponsorship for HSBC Holdings said: "HSBC has been running a series of festivals with children mostly from non rugby backgrounds for the past few months and it was fantastic that four such legends of the game were able to get involved today and really inspire the children to play rugby. It really was a special experience for everyone here."

As well as coaching the children, each participating school received a set of rugby clothing so that the children can continue to play rugby once they go back to their schools. The kit was donated through a partnership with HSBC and Mr Price.

Whilst the HSBC ambassadors were busy in the Durban sunshine, another HSBC Rugby Festival was happening in Tredegar Comprehensive School in Newport. Throughout their sponsorship of the British & Irish Lions HSBC has staged over 500 festivals across the UK & Ireland and South Africa, and the Newport festival was the penultimate event in the nine month initiative.