Martyn a must for Lions says Solomons

Southern Kings coach Alan Solomons is expecting Ian McGeechan to select Martyn Williams "as an out and out openside" to battle against the Springboks. [more] 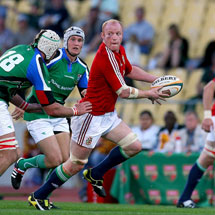 Southern Kings coach Alan Solomons is expecting Ian McGeechan to select Martyn Williams "as an out and out openside" to battle against the Springboks.

The former Ulster and Northampton Saints coach, whose hurridly arranged team gave the Lions a few frights in Port Elizabeth before going down 20-8, believes the breakdown will be a key area ikn the outcome of the series.

And that’s why he believes the veteran Cardiff Blues and Wales flanker will be given the No 7 jersey to go head-to-head with Heinrick Brussow in the battle for the loose ball.

“I think they will think very carefully about who they pick in their back row for the test. Martyn Williams is an outstanding footballer and openside flanker, whereas David Wallace is a great rugby player and ball carrier,” said Solomons.

“If I were them I would be looking for an out and out openside to play against the Springboks.”

Solomons put the cat amongst the pigeons on Tuesday with the way he asked his side to take on the Lions. They flew into the tourists and caused no end of damage with their often late, high and illegal tackling.

But Solomons believes it was the Lions who threw down the gauntlet to every team in South Africa by picking such a massive set of forwards for the tour.

“They have come out here and made a statement with their selection – they want to take on the Springboks physically,” said Solomons.

“The collisions will be very, very important in the series. I think one area they will look to attack the South Africans is in the scrums because the line out is one of the strongest parts of the Springbok game.

“The central tenet of their game is physicality. If they get knocked back they will be in trouble.

“Their best chance is winning in Durban – they simply have to win that first Test. If they don’t they will make a rod for their own backs in the two Tests on the High Veld.

“It is going to be a massive physical confrontation. There is a huge amount at stake in Durban and, if the Lions get that first win, there will be some real pressure on the Springboks."