Welsh outside half Stephen Jones made his international debut against the Springboks in 1998, but has yet to beat them in eight outings. [more] 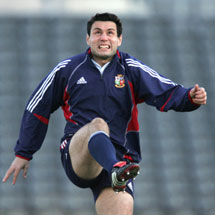 Welsh outside half Stephen Jones made his international debut against the Springboks in 1998, but has yet to beat them in eight outings.

Now he is chasing a double first – beating the Boks and winning a Test with the British & Irish Lions.

Jones got the nod over Ronan O’Gara for the first Test in Durban, as he did foer the three games in new Zealand four years ago, and can’t wait to chase his twin goals.

“It has been a wonderful tour so far. We’ve worked hard and been successful, but the real challenge starts tomorrow – and it is going to be a huge challenge because we are playing the world champions,” said Jones.

“It is going to be a very physical game and the contact area is going to be tough. Our preparation has been fantastic. We have a wonderful squad of players here, but it is all about winning and that’s the goal.

“We are a team that only came together four weeks ago but we have gathered momentum, got better as the tour has progressed and we are in a good place at the moment. I think they will stick to their simplistic game plan, but we are happy with where we are at.

“It is hugely important to win the first test, it is as simple as that. It is our first chance to show how good we are and it is about us doing that.

“It is a massive game for us. We have to be clever how we play, but it is all about winning and this is our first opportunity.

“The amount of support we’ve got out here is fantastic and it might seem like a home game for us here in Durban.”

The last time the Lions picked the current Welsh olutside half for a Test match in Durban things worked out pretty well. Neil Jenkins, albeit wearing the No 15 jersey for the Lions, kicked five penalties and the Lions took the series 2-1.