Lions pack will change and improve

British & Irish Lions forwards coach Graham Rowntree says his side can put right their scrum and driving maul problems before the second Test, but admits there could be changes to all three rows of the pack. [more] 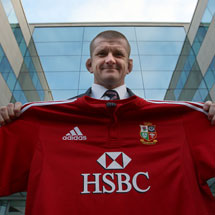 British & Irish Lions forwards coach Graham Rowntree says his side can put right their scrum and driving maul problems before the second Test, but admits there could be changes to all three rows of the pack.

Three scrum penalties in the first half gifted the world champions nine points and then John Smit’s pack rolled Heinrich Brussow over for a try from a close range line-out.

Rowntree was part of the coaching team that made the decision to replace England prop Phil Vickery five minutes into the second half and then make a second change to the front row a few minutes later.

Those changes, coupled with the host made by the Springboks shortly afterwards, changed the face of the game. The Lions dominated the final quarter and came within one score of winning the game.

But former Leicester Tigers, England and Lions prop Rowntree knows there is plenty to work on ahead of this weekend’s second Test in Pretoria.

“The changes we made sorted the scrum problems out, but three penalties from eight scrums in the first half cost us nine points. That, as well as our lack of defence of their driving line-out, gave us a mountain to climb,” admitted Rowntree.

“But we nearly made it and I was delighted with the impact that Adam Jones and Matthew Rees made when they came on. The changes we made made the scrum better.

“Phil Vickery is upset, but it is not about hanging individuals out to dry. There is accountability throughout the whole pack.

“He is sore mentally and physically and, by his own admission, he struggled. We failed to keep a lid on ‘The Beast’ at engagement time.

“We simply didn’t dominate the engagement well enough and they were able to get under us. The referee rewarded the dominant scrum and I’ve no real issues with the decision he made.

“We were under a lot of pressure and we have to take it on the chin. Bismarck du Plessis and the Beast got stuck into Phil and we have to see how that happened.

“They won the battle and, having gone nine points down in my area, we have to take a look at it and have an honesty session in training this week. There was a scrum after about nine minutes when they lifted us up.

“If I had been their scrum coach watching that I would have retired and gone to Panama and smoked a cigar. A splintering scrum can have a demoralising effect on any team.”

Ireland’s John Hayes and England’s Tim Payne have been called-up to bolster the Lions’ front row resources and 2005 tourist Hayes looks certain to play some part against the Emerging Springboks in Cape Town on Tuesday.

Rowntree is happy to have another game slotted in between the Test matches and says there is a huge opportunity for Tuesday’s team to stake a claim for selection at the weekend.

“Changes will be made. You only need to look at how the changes we made during the game to fix our problems worked out to see that,” added Rowntree.

“There could possibly be changes in all three rows of the scrum. We have the team and personnel to fix it.

“We are in good nick conditioning wise and we have to back ourselves, even at altitude. They will certainly be disappointed with the tries they conceded.

“There is enough for us to build on to be able to do this. Once we have ironed out the things we weren’t doing well we’ll be fine.

“It is all about going into this weekend positive and confident. We have got to lift the players now and I believe there are enough big game players in our squad to do that.

“All the players and coaches are hurting, but we have enough experience to come back from this defeat.”