Shane wants to make most of last chance

Shane Williams has talked about the pressures heaped upon him after his runaway success story of 2008 and being crowned the IRB World Player of the Year. [more] 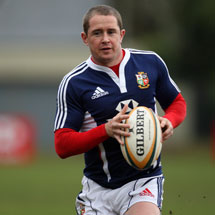 Shane Williams has talked about the pressures heaped upon him after his runaway success story of 2008 and being crowned the IRB World Player of the Year.

In 2008, Williams helped Wales win the Triple Crown and Grand Slam, was voted the RBS Six Nations Player of the Tournament, became Wales’ leading try scorer, won the EDF Energy Cup with the Ospreys, scored two wonder tries against the Springboks in South Africa and was voted Welsh Sports Personality of the Year.

Speaking ahead of the British & Irish Lions clash with the Emerging Springboks the Ospreys and Wales wing said he intends to make the most of his “last chance” to convince the selectors to give him a turn in the final two Tests.

Before the tour started it was assumed that Williams, a 2005 test Lion, would be the leading candidate for one of the wing spots in South Africa. But he claims he has found it difficult to get his hands on the ball and has no qualms about being left out in favour of clubmate Tommy Bowe and Ugo Monye.

“This is my last chance and it could possibly be my last appearance in a Lions jersey. I’m just starting to realise that and I want to give myself every chance of playing again after Tuesday night,” said Williams.

“I know I need a big game. It is all up to me and I’m looking forward to taking the opportunity.

“I might have to go looking for work more than I have done in the games to date. I haven’t got my hands on the ball as much as I would have liked and that has been disappointing.

“If the ball isn’t going to get out to the wing then I will have to go looking for it. Maybe I’m trying too hard, but I’ve found it difficult to get involved.”

Williams has started three games and come on as a replacement in two others, so he has had plenty of opportunities to show off his skills. Yet he is the one wing who has yet to score on tour.

“Nobody is more disappointed at the way I am playing than myself. I put pressure on myself to perform,” added Williams.

“I knew this season was going to be more difficult than the last. The attention seems to be on me both on and off the field. But I’m a big boy now and I have to deal with that pressure.

“I’d like to think I’m a good enough player to handle that. I still think I have got a lot more to offer.

“That’s why I was glad to be mentioned in the starting line-up for the game against the Emerging Boks. I want to prove a few people wrong and I want to come away from this tour, whether I’m involved in the last two Tests or not, having given my all.

“I thought Ugo was unlucky not to score in the first half and it was a brilliant piece of defending by Jean de Villiers to stop him. It was jut unfortunate at the other end of the field and that’s they way it can go – it happens to all of us.

“This is a massive game for a lot of players and I’m sure we can go out there and win it and then do the same in the last two Tests. I felt we were the better side on the field last weekend and, having watched it again, I thought we were very unlucky.

“I want to play more than anything this weekend and I’m determined to be involved. I spoke to Bryan Habana after the game and I told him I was gutted that I wasn’t playing against him. And he said ‘you never know, I might see you next week.’

“That’s the way it goes and I must keep on training hard and take my chances.”

News South Africa
Previous story Down, but not out!
Next story Trio reunite for good cause