Your predictions back the Lions

Prior to the start of the Test series between the Lions and Springboks, we asked for your predictions on would come out on top and by what margin. [more] 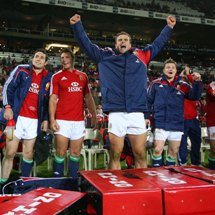 Prior to the start of the Test series between the Lions and Springboks, we asked for your predictions on would come out on top and by what margin.

Following the Lions’ first Test defeat in Durban last Saturday, 7.8 per cent of you are already out of the running.

That many of you stated that the Lions would win the three-match series 3-0 and therefore record their first series whitewash since 1891.

Unfortunately the 3-0 scoreline to the Lions is no longer possible, but there’s still hope that you could have your faith in the Lions rewarded with a narrower series triumph.

An impressive 56.7 per cent of you voted for the Lions to win the series 2-1 – by far the largest percentage of the four options we offered you when casting your vote.

If Ian McGeechan’s men can produce something special in Pretoria this weekend then more than half of the total voters could be proved right come the final whistle of the following Saturday’s third and final Test in Johannesburg.

If the Boks move 2-0 ahead at Loftus Versfeld on Saturday, then the best the Lions can hope for is that 22.2 per cent of you have predicted perfectly with a 2-1 scoreline to the world champions.

The worst case scenario would obviously be a 3-0 series win for Peter de Villiers and co, something that 13.4 per cent of you predicted before the first Test had taken place.

Here’s hoping that it’s the 56.7 per cent of you that have been consulting you crystal ball.

Plenty of you voted before the Test series started, but what are your thoughts now that the first international has gone the way of the Boks? Still confident that the Lions can bounce back following the 26-21 defeat in the opening rubber? See the bottom right-hand side of any news story to cast your vote.

News
Previous story Down, but not out!
Next story Trio reunite for good cause