Shane Williams believes he has done all he can to win a British & Irish Lions Test spot ahead of Saturday's battle with South Africa. [more] 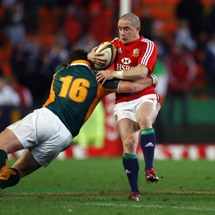 Shane Williams believes he has done all he can to win a British & Irish Lions Test spot ahead of Saturday’s battle with South Africa.

The Wales and Ospreys winger played in the 13-13 draw with the Emerging Springboks and faces a huge fight with current incumbent Ugo Moyne and Luke Fitzgerald for the left wing place for the second Test in Pretoria.

And after sitting out the opening Test loss last weekend, the IRB World Player of the Year reckons he can still play a major part in the remaining games with the world champion Springboks.

Williams, 32, said: "I thought I did very well defensively and the back three played really well. We covered the bases and we knew there would be a lot of kicking in these conditions with some big boots out there in the back three of the Springboks.

"We knew we would have to do a lot of running too. Attacking-wise, we knew from the start that we would be picking up the scraps all day.

"It is difficult when you can’t get into your stride. I feel I’m looking for work and the hunger is still there but it’s just wherever I go, the ball goes the other way and that’s what happens sometimes.

”There’s no complaints. I’ve worked hard enough on this tour, in training and in the games but it hasn’t gone my way.

"After last year, maybe that was the way it was going to go. I’m still enjoying the tour and remaining positive. Hopefully that will continue. I thought we did okay but we will have to wait and see."

Williams showed flashes of the inspirational form which led him towards a glittering 2008 in the dismal conditions in Cape Town.

And despite conceding a last minute try, the Welsh wing wizard, who made a Test appearance in New Zealand four years ago, believes the Lions will take heart from a gutsy performance ahead of facing Peter de Villiers’ men at Loftus Versfeld on Saturday.

"A draw will have to do the job and the way we will have to look at it is we haven’t lost the game. There’s no point in dwelling in what has happened. It was tough out there and we played against a very good side.

"It was a game we should have won and to have the game drawn in the final minute is like a kick in the teeth. But in all fairness to the Emerging Springboks they played well in the second half and put us under a lot of pressure."