Ugo Monye is delighted to be getting a second chance to prove himself in a British & Irish Lions Test jersey in Johannesburg this weekend. [more] 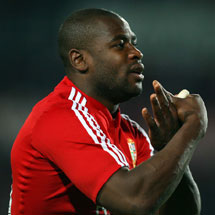 Ugo Monye is delighted to be getting a second chance to prove himself in a British & Irish Lions Test jersey in Johannesburg this weekend.

The Harlequins and England flyer proved his worth in the early stages of the tour to win the vote ahead of IRB World Player of the Year Shane Williams for the left wing berth in the first Test in Durban.

But two missed try scoring opportunities in that game cost him his place in the side for last weekend’s second Test in Pretoria – one of the few down turns in Monye’s amazing season.

Now, though, he is back for the final Test and can’t wait to put right what went wrong in Durban and help the Lions end their 10 match tour on a high.

“I was gutted not to be involved last week, but I kept my head down and trained hard. I’m lucky to get another opportunity,” said Monye.

“Not everyone gets an opportunity to put right what’s gone wrong before. And there is no bigger motivation for a side after losing a game like we did last weekend to get back out onto the pitch.

“We are desperate for a good performance and a victory. We are playing the world champions and we want to give the wonderful Lions fans something to shout about.”

Monye has had an incredible season with club and country and has enjoyed every moment of his first Lions tour.

“It’s the best time of my life being out here with the Lions. I’ve really enjoyed this year and I’ve had a smile on my face in everything I’ve done,” said Monye.

There have been a few down moments during the year and last week was difficult. To play in a test for the Lions is the pinnacle of any player’s career.

“But to go from that to not being involved in the team in the space of a few days is hard to deal with. I’m so proud to be out here with the Lions and even more so to have played for them in a Test.

“Saturday is going to be another special moment in my life and let’s hope there is a good ending.”