With the 2009 series now done and dusted, we take a look back at the impact of skipper Paul O'Connell through the eyes of coaches, team-mates and the man himself. [more] 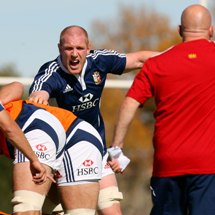 With the 2009 series now done and dusted, we take a look back at the impact of skipper Paul O’Connell through the eyes of coaches, team-mates and the man himself.

In the lead up to Ian McGeechan’s original Lions squad announcement on April 21 of this year, the talk surrounding the tour captaincy centred on just two men.

The chances of Welsh skipper Ryan Jones, a Grand Slam winner 13 months earlier, seemed to have been dismissed on current form, as had the hopes of Scotland’s incumbent Mike Blair and his English counterpart Steve Borthwick. London Wasps veteran Phil Vickery’s name had been discussed by certain sections of the media but it would have been a huge surprise if the likeable Cornishman had been given the go ahead to lead the Lions in South Africa.

When it came down to the biggest call of all, only Brian O’Driscoll and Paul O’Connell appeared to be in the running for the most-coveted job in British and Irish rugby.

O’Driscoll had just led his country to their first Six Nations clean sweep since 1948 and had gained previous captaincy experience with the Lions in 2005. While that tour had ended in huge personal and collective disappointment, many observers were tipping the Leinsterman to follow Martin Johnson in becoming only the second-ever player to lead the Lions on more than one tour.

O’Driscoll’s numerous supporters pointed to his recent success with the Irish national side, his superb form following a couple of seasons of relative underachievement, and the fact that the outside centre had seen and done it all before. O’Driscoll’s reputation stretched all across the globe, with the South African coaching staff admitting they fully expected the 30-year-old to be leading the Lions out of the tunnel in Durban, Pretoria and Johannesburg.

Unlike so many of the other names previously mentioned as captaincy candidates in the four years since the 3-0 whitewash in New Zealand, O’Driscoll was almost guaranteed his place in the Lions’ Test starting lineup. Yes, Tom Shanklin had been hugely impressive in 2008 and ’09; yes Keith Earls and Max Evans had shown glimpses of their undoubted potential; and yes Mike Tindall and Jamie Noon had continued to solidify the England midfield, but no one seriously expected anyone other than O’Driscoll to be wearing the No13 shirt when the Lions stepped out for the first Test at The ABSA Stadium on June 20.

All in all, O’Driscoll must have had a strong case and very few would have argued otherwise if McGeechan had given this particular Irishman the nod. But the same could be said about O’Connell.

He too had previous experience of the Lions mantra; he too had lifted sought-after trophies high above his head; and he too was almost certain to win a Test spot come June and July.

Under O’Connell, Munster had become the dominant force in European rugby, claiming Heineken Cup crowns in 2006 and 2008 and establishing themselves as the team to beat in the continent’s most-treasured club competition. His leadership may not have been utilized on the international stage on a regular basis but his position when wearing the red of his beloved province had never been in doubt. When it comes to the green of Ireland, O’Driscoll may be the man in the limelight but there can be no doubting the role O’Connell plays both on the field and behind the scenes. He may not be the recognized captain of his country but O’Connell still plays with the aura and determination associated with such a responsibility.

In 2005, O’Connell, unlike O’Driscoll, had played in all three Tests against the All Blacks. He may not have performed to the peak of his capabilities but very few can say they did. O’Connell was there until the end, in the thick of the action as the Lions took the kind of beating that would simply add to his determination to succeed four years down the line.

So, with so many similarities between his two front runners, together with their familiarity of each other’s games and personalities, when it came to choosing who would be the Lions’ figurehead in the Republic this summer, McGeechan must have known that O’Driscoll and O’Connell would work in tandem whatever his final decision.

And so he plumped for O’Connell. In doing so, he praised O’Driscoll’s attributes and insisted he would have an important role to play on tour, but O’Connell was his man. The giant second row fitted his criteria almost perfectly, he said. The 62-year-old Scot had made his preference for a forward perfectly clear in the build up to the tour, just as he had done in 1989 and 1997 when selecting Finlay Calder and Johnson as his standard bearers in the heat of battle. O’Connell would follow in their footsteps in leading the Lions towards their foreign adventure and if he could match the aforementioned pair in securing a series victory then his coronation would never be questioned.

Unfortunately for McGeechan, O’Connell and the rest of the squad, the 2009 Lions fell just short. A series that appeared there for the taking slipped from their fingers despite three heroic performances five-and-a-half thousand miles from home.

The class of 2009 were superb throughout their 10-match tour, rekindling the famous Lions spirit and playing with a refreshing sense of adventure, but the fact that they lost the Test series will lead to a host of inevitable questions and one of those will revolve around the choice of captain -given the end result was Paul O’Connell really the right man for the job?

To everyone involved, the answer is a simple one. It’s a question to which the answer does not involve any umming or aahhing or indeed a pause for thought. Instead, it’s a question which each and every Lion will answer with a resounding ‘yes’.

Paul O’Connell was the correct choice and an inspirational captain. He was an effective leader and exceptional character; an extraordinary team-mate and a formidable opponent. In short, O’Connell was everything the Lions could have asked for and more. The series may have been lost but O’Connell should return home with his reputation enhanced.

Here’s what his fellow Lions, his team coach and a selection of outsiders had to say on how 2009 Lions captain had acquitted himself on tour. For O’Connell and all who know him, it makes for happy reading.

"Paul has been absolutely immense on this tour and is the best captain I have ever worked with. The way he has handled himself in the last week of the tour speaks volumes about the man.

"He spoke to the group on Friday night, telling us what the final Test meant to him and what an honour it had been for him to play for the Lions. Paul told us our performance in the game would leave a legacy for the next four years. It was real hairs-on-the-back-of-the-neck stuff.

"I don’t think Paul gets the credit he deserves. When you play with or against him you realise just how good a player he is. He does all the unglamorous work at close quarters and has an unbelievable engine. People in the stands don’t necessarily see that.

"As a captain, he is absolutely inspirational – we all have so much respect for him."

"Paul, what a captain he is. He’s inspirational, awesome, he leads the way and his speeches are great."

O’Connell proved his worth among his fellow Lions

"There were a lot of harsh words said (in his pre-match speech prior to the third Test), a lot of honesty, and that’s Paul. He doesn’t bully you about anything and he tells you how it is. I thought Paul was going to cry – one of the toughest guys I’ve ever played against and with.

"It was just emotions really, what it meant to him. Paul said that it was an honour to captain a great bunch of guys, and I agree with him. From the start we’ve been a good family, we’ve stuck by each other and I think it was reflected on the field today. And Paul was an inspiration to anyone who wants to be captain. Not only does he talk the talk, he walks the walk."

"He’s done a fantastic job. He’s been a great captain and he’s played every single minute of the three Tests.

"You can see what he’s put in, he’s been very good with the players and he’s leaned on the other experienced players in setting the highest standards. He’s been an outstanding captain.

"Paul led the side magnificently. He was instrumental in getting the squad together. It meant that when things went wrong and the pressure came on these players were never going to fall apart."

"The quality of the comeback in Durban, the sheer commitment in Pretoria and Johannesburg is due in no small part to the fact that this was one of the happiest, unified tour parties ever and for this, Paul O’Connell deserves as much credit as the tour management.

"Any suggestion that he lacked presence or charisma doesn’t tally with the testimony of team-mates such as Mike Phillips, who gave unqualified and unsolicited praise, or Nathan Hines, who spoke glowingly about the skipper’s organisational qualities as the Lions’ de facto lineout coach.

"Suggestions that O’Connell was under threat for his place were so wide of the mark to be laughable. If memory serves, he was turned over just once in the entire tour.

"While his reputation in the world game took a serious denting with the Lions four years ago, he returns from this tour in credit."

"O’Connell, in the most difficult of circumstances – and despite the clear presence of those wanting him to fail – delivered a level of moral and physical leadership beyond reproach."

"After the failure of the 2005 tour, when the Lions, including their Irish lock, were routed three times by the All Blacks, this has been a diametrically contrasting series, endlessly competitive and well balanced. O’Connell deserves great credit for helping to make it so. "

O’Connell on his own assessment of the Lions captaincy

"Playing with your province and your country, you’re in a comfort zone. You know the people very well; you’ve had your ups and downs. You come over here and you really don’t know each other that well, and to become a team that can beat the world champions in the back yard you have to build relationships and the senior players have to contribute a lot to that.

"With the Lions, it’s about compromise. It’s about buying 100% into what the thing is about, because if you don’t, the difficulty of creating a side from scratch in such a short time is bound to be too great.

"I think we did build a team here, and while we didn’t win the series – the Springboks have the laurels, and they deserve them – we leave here knowing that the Lions jersey is the best jersey any player can pull on.

"It was very hard to figure out what captaincy would have been like before the tour, but I must say I’ve enjoyed it. The last three weeks have been tough pressure-wise, that’s what international sport is about and it’s been an enjoyable experience."