Morne Steyn, the man who brought the 2009 British & Irish Lions to their knees, turned Kiwi slayer as he notched all the Springboks' points in a sensational 31-19 victory over New Zealand in Durban. [more] 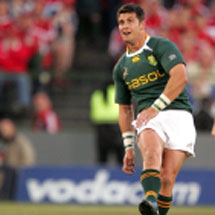 Morne Steyn, the man who brought the 2009 British & Irish Lions to their knees, turned Kiwi slayer as he notched all the Springboks’ points in a sensational 31-19 victory over New Zealand in Durban.

Steyn’s incredible year continued as he marked his first start in the Tri Nations with a tournament record tally and a South African best against their arch-rivals at the ABSA Stadium.

It also meant two wins in a row for the world champions over the current holders of the Tri Nations trophy – and two wins without conceding a bonus point. With Australia to come in Cape Town next weekend they could be well clear at the top of the table with half the games played.

Steyn, who helped the Bulls win the Super 14 title and then kicked the last gasp penalty from inside his own half to win the second Test for the Boks against the Lions, helped himself to eight penalties and also converted his own try in a virtuoso display.

On a day that Bryan Habana and Jean de Villiers celebrated their 50th caps, and skipper John Smit became world rugby’s most capped captain, it was the rookie Steyn who grabbed the headlines and the plaudits.

He helped the home side recover from an early 10-3 deficit, following a try by Isaac Ross for the All Blacks and a penalty and conversion from Steve Donald , and ensured they changed ends 22-13 ahead by waltzing over for a try to add to the stream of points from his trusty boot.

Welsh referee Nigel Owens stamped his authority on the game and sent three players to the sin-bin – JP Pietersen and Bakkies Boatha for the Boks and Ross for the Blacks – as well as producing a stream of penalties.

Between the, Steyn, Donald and Luke McAlister landed 12 penalties from the 22 awarded and the 14-8 count against them suffered by the visitor’s was not the only telling statistic. They made twice as many handling errors, 28-14, lost four line-outs to the Boks’ one and lost two scrums.