Lions coach more determined than ever

Lions coach Shaun Edwards has returned to the domestic game more focussed than ever following his exploits with Britain and Ireland's elite. [more] 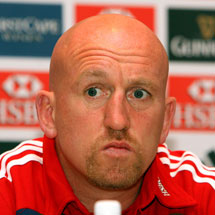 Lions coach Shaun Edwards has returned to the domestic game more focussed than ever following his exploits with Britain and Ireland’s elite.

The man who supervised the Lions’ defence during the 10-match tour of the Republic is now preparing for the new season with former Guinness Premiership and Heineken Cup winners London Wasps.

The Wycombe-based outfit finished the 2008/09 campaign without any silverware – the first time Edwards had ended a season empty handed in seven years – and the former rugby league star is determined to make amends this time out.

“We’ve got some very, very focussed Wasps players at the moment and we need to put our best foot forward at the start of the season,” said Edwards, who will work with New Zealander Tony Hanks at Wasps following the departure of Lions head coach and Wasps director of rugby Ian McGeechan.

Edwards experienced highs and lows with the Lions this summer, as the tourists produced some heroic performances but ultimately lost out in the three-match Test series against the Springboks.

And tasting defeat having coming so close to victory is not something that sits easily with the 42-year-old going into the new campaign.

“After winning lots of things with Wasps, last year was the first year I hadn’t won anything as a coach since 2002,” added Edwards, who captained England at schoolboy level in both codes of the game.

“I don’t like being a brave user. I prefer to be a brave winner.

“I’m totally focussed on the new season and I’m more determined than ever, to be honest.”