Former Lions tourist Jonny Wilkinson has continued his impressive start to life in France with another fine performance in the Top 14. [more] 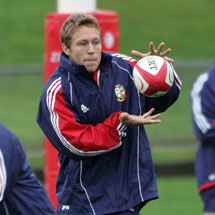 Former Lions tourist Jonny Wilkinson has continued his impressive start to life in France with another fine performance in the Top 14.

Wilkinson, who toured Australia and New Zealand with the Lions in 2001 and 2005 respectively, moved to big-spending Toulon this summer having spent his entire professional career to date at Guinness Premiership outfit Newcastle.

After beginning his new challenge across the English Channel with tallies of 14 and 17 points in Toulon’s opening two league fixtures, Wilkinson added a further 15 points as his club registered their second victory in three attempts.

The England fly-half kicked five penalties as Toulon beat newly promoted SCA Albi 15-9 away from home to climb to third place in the Top 14 standings.

And while Toulon can be pleased with two wins and a draw at the start of the new campaign, Wilkinson can be equally satisfied with his position at the top of the French points scoring charts.

The 30-year-old currently has 46 points to his name to head the likes of Castres’ Cameron McIntyre, Clermont Auvergne’s Brock James, Perpignan’s David Mele and Jean-Baptiste Elissalde of Toulouse in the race for the French golden boot.
Wilkinson will be back in action on Wednesday night when Toulon host championship leaders Clermont in round four.