Double Lions tourist Phil Vickery has warned his club side to be wary of a wounded animal this weekend. [more] 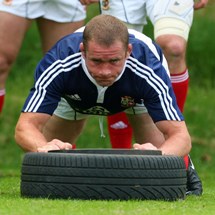 Double Lions tourist Phil Vickery has warned his club side to be wary of a wounded animal this weekend.

Vickery, who has just returned from his second tour with Britain and Ireland’s elite, is expecting fireworks when Wasps face Harlequins in their opening fixture of the new Guinness Premiership season this Saturday.

Wasps’ London rivals have been making headlines for all the wrong reasons this summer as a result of the now infamous ‘Bloodgate’ scandal but Vickery believes that the ongoing controversy will make them even more dangerous opponents in the second match of the Twickenham Double Header.

"If anything, this summer’s events will pull the group together and make them stronger," Vickery told the London Evening Standard.

"The Quins team will be highly motivated to go out this weekend and prove a point.

"Quins have got world-class players — they have a great side – and we expect it to be a tough game."

Vickery could be joined in the Wasps front row on Saturday by fellow Lion Tim Payne, while second row Simon Shaw – one of the stars of the third Test victory over the Springboks – and Joe Worsley could also feature for the 2007/08 Premiership champions at English rugby’s headquarters.