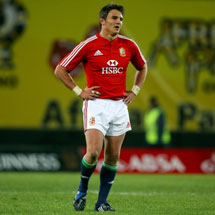 This time last year, the Leicester No9 was simply hoping to get his career back on track following a 10-month spell on the sidelines.

Having re-gained his place in the England squad and played a major role in the majority of his club’s double-winning season of 2006/07, Ellis suffered a horrendous knee injury in the Guinness Premiership semi-final win over Bristol.

That setback ruled him out of the game until March of 2008 and forced him to lose his international place and a likely appearance at the 2007 World Cup.

The result was tha, while other players of his standing began last year dreaming of a place on the Lions’ end-of-season tour of South Africa, Ellis was concentrating on nothing more than staying fit and enjoying a sport it was rumoured he may never have played again.

“The Lions wasn’t something I couldn’t have expected,” explained Ellis, who made Ian McGeechan’s original tour party alongside Welshman Mike Phillips and Ireland’s Tomas O’Leary.

“You always know it’s a Lions year but, for me personally, it was something I never thought I could obtain. That meant there wasn’t even any point thinking about it.

“All I was just concentrating on was trying to get in the team here at Leicester and taking one thing at a time.”

And while others were looking further ahead, Ellis knew that the aim of becoming the number one No9 at Welford Road alone would be a far from simple one. The East Midlands outfit had blooded England youth scrum-half Ben Youngs during Ellis’ absence and signed the highly thought of Frenchman Julien Dupy from Biarritz during the close season.

A tough task was exactly what it proved to be, as Dupy’s goal-kicking expertise and consistent form limited Ellis’ game time with his home-town club.

“It was very much an up and down season for me,” added Ellis, who was forced to play second fiddle to his French team-mate during both the Guinness Premiership and Heineken Cup finals earlier this year.

“It was always tough getting in the Leicester team, then going away with England, being banned, getting injured and then at the end of the year getting to two finals. It was such a roller coaster ride.”

The ban Ellis talks of was for a dangerous tackle on Perpignan’s All Black star Dan Carter during a European pool match. It saw him suspended from the game for six weeks and threatened to de-rail his chances of an England recall under former Leicester team-mate Martin Johnson. Fortunately for Ellis, he remained on the fringes of Johnson’s squad, and when Harlequins’ Danny Care hurt his ankle prior to the opening Six Nations encounter against Scotland, Ellis was catapulted back into his country’s starting line up.

With his performances in an England shirt particularly impressive, the chance of a Lions call suddenly became a real possibility. And when that call did arrive and Ellis travelled out to the Republic with the best the Home Unions have to offer, the camaraderie within the squad ensured the experience was a truly memorable one for the 27-year-old.

“All the lads were superb. Everyone bonded really well. Everyone was in the same boat and we all went out there with a job to do. It’s always hard going away for that amount of time after a long season but it was a great experience and one that will always stay with me.

“Team spirit wasn’t hard to obtain. We had a really good time out there. You know some of the guys who are there because they’ve been around for a long time or you’ve played against them. You put egos aside and everyone got on really well.

“Training was sharp and we were very unlucky not to come away with a series win. It was a great experience and definitely something that will live with me for the rest of my life.”