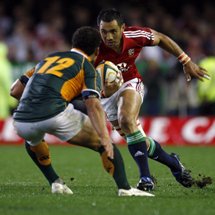 The England centre had a scan on his injured left shoulder, with the results showing that he needs an arthroscopy.

Flutey will therefore have exploratory surgery early next week with the aim of discovering whether he will require a more extensive procedure or whether his injury can simply be treated with physiotherapy.

Flutey, who set up the second of Shane Williams’ tries in the Lions’ comprehensive third-Test win over South Africa, moved to French outfit Brive this summer but has played just one game to date for his new side.

If the 29-year-old does need to go under the knife again following the arthroscopy, he could miss his country’s autumn internationals against Australia, Argentina and New Zealand.

"Riki has had problems with his shoulder since the Lions tour. We agreed to let the England doctor examine it last Friday," said Simon Gillham, the chief executive at Flutey’s new club.

"Nothing significant showed up on a scan, just wear and tear, but Riki is going to have an arthroscopy to establish whether it is okay to carry on as it is or whether it needs some work doing to it.

"I had a conversation with Martin Johnson about this and the expression he used was, ‘We’re going in to have a look’.

"If everything is okay then Riki will be back in Brive on Tuesday and we will agree on a course of rehab for him. But if an operation is needed it is impossible to say how long he’ll be out for."