Nathan Hines and Gordon D'Arcy made their first appearances since the Lions tour as Leinster beat Newport Gwent Dragons at the Royal Dublin Showground. [more] 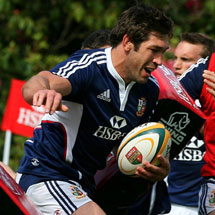 Nathan Hines and Gordon D’Arcy made their first appearances since the Lions tour as Leinster beat Newport Gwent Dragons at the Royal Dublin Showground.

Scotland second-row Hines and Ireland centre D’Arcy both came on as early second-half replacements as the reigning Heineken Cup champions gained their first win of the new Magners League season.

But while Leinster welcomed back both Hines and D’Arcy for the 23-14 victory, four more of their 2009 Lions contingent continued their rest following a long, hard season with province, country and Britain and Ireland’s elite.

Luke Fitzgerald, Jamie Heaslip, Rob Kearney and 2005 Lions skipper Brian O’Driscoll have all yet to feature so far this season after each winning Test honours on the Lions’ 10-match tour of South Africa.

Despite the absence of the star quartet, Leinster still had too much strike power for a fully committed Dragons side who were denied a losing bonus point thanks to Shaun Berne’s last-gasp drop goal.

The former Bath centre slotted the second of his close-range efforts deep into injury-time as the Irish province bounced back from a shock opening league defeat to the Scarlets.

D’Arcy had earlier marked his return with an immediate contribution, setting up Fijian international Isa Nacewa for the decisive score just 60 seconds after replacing Fergus McFadden.

The Dragons scored a try of their own through Martyn Thomas and two penalties and a drop goal from their New Zealand-born fly-half James Arlidge, but Jonathan Sexton added four penalties to Berne’s brace of drop goals to give the hosts a deserved win.