Double Lions tourist Jonny Wilkinson has claimed French rugby has already given him one of the biggest thrills of his life. [more] 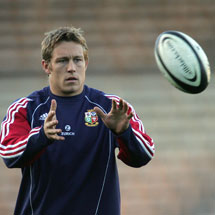 Double Lions tourist Jonny Wilkinson has claimed French rugby has already given him one of the biggest thrills of his life.

Wilkinson, who toured Australia and New Zealand with the Lions in 2001 and 2005, swapped the Guinness Premiership for the Top 14 this summer and is delighted with what he has seen so far.

Having impressed the locals ever since first wearing a Toulon shirt in league action in August, England’s World Cup winning hero was again the star man last weekend as his new side bounced back from successive defeats with a fine win over Toulouse.

And with the latest installment of his new career taking place in front of a crowd of 55,000 (many of whom wore shirts emblazoned with his name), Wilkinson could not hide his excitement after he kicked all Toulon’s points in an 18-13 victory at the Stade Velodrome in Marseilles.

"That was one of the best experiences of my life," said Wilkinson, whose playing days appeared to be in doubt after a dislocated knee cap prevented him from making a claim for inclusion in a third Lions squad earlier this summer.

"To play in front of such a crowd in a game like that was a thrill I did not know existed at club level. It was a unique atmosphere and we took real pleasure from it.

"It has been a long road back. There have been times in the last year I doubted I’d see a day like this again. But I always fought against that doubt."