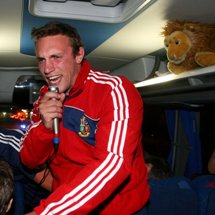 The Scotland skipper was a replacement for the injured Tomas O’Leary on this summer’s tour of South Africa but wasn’t asked to lead Ian McGeechan’s side in any of the 10 tour matches.

Instead Blair concentrated on challenging Mike Phillips and Harry Ellis for a Test spot while the likes of Paul O’Connell, Brian O’Driscoll, Phil Vickery and Donncha O’Callaghan were handed the ultimate honour of captaining Britain and Ireland’s elite.

But now Blair’s first start since the tour of the Republic also sees him regain his club armband as the Scottish capital side bid to overcome the European Champions at Murrayfield.

And having experienced a remarkable camaraderie and team spirit during his time with the Lions, Blair is looking for a similar attitude to continue among a largely home-grown Edinburgh squad that has begun the domestic season with three wins from their opening three fixtures.

“Edinburgh is a good club to be a part of and we’ve all brought our own ideas to create a real club feel to it,” said Blair.

“It helps that there is a core of Edinburgh guys who are born and bred in the city who understand the traditions and the Edinburgh values which are hard work and humility.

“The more guys you have coming through and only playing in Edinburgh does make a big difference – you create a strong identity.

“The more guys you have playing together over a long period of time then the more successful a club will be.

Fellow Lion Ross Ford is also included in Edinburgh’s starting XV, while another Scottish Lion, Nathan Hines, will pack down in the second row for Leinster.

News
Previous story Steyn staying at 15?
Next story Wallabies looking to the future – and the Lions?