Jeremy Guscott will forever be remembered as the Lion who clinched a stunning series victory over the Springboks in 1997. [more] 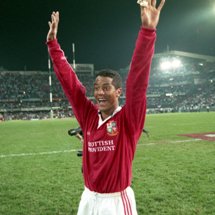 Jeremy Guscott will forever be remembered as the Lion who clinched a stunning series victory over the Springboks in 1997.

The image of the Bath and England centre kicking a match-winning drop goal in the second Test in Durban still brings a smile to the face of many a Lions fan.

Having surprised the rugby world at large by winning the first Test in Cape Town, the '97 Lions secured their place in history thanks to Guscott's timely intervention seven days later. With the scores tied at 15-15 with just minutes remaining, Guscott stepped up to the mark to take Matt Dawson's pass and send the Lions into Test-match heaven.

Guscott played all three Tests on that famous tour of South Africa, having been an ever present in the Test series against the All Blacks four years earlier.

He began his Lions career as a 23-year-old on the 1989 tour of Australia, scoring a crucial try in the second-Test win before playing his part in a 19-18 victory over the Wallabies in the third and final Test.

Capped 65 times by England, Guscott made a total of 22 appearances for the Lions, playing in eight Test matches against all three of the great southern hemisphere powers.

On the concept of the Lions

"There is nothing in rugby to touch the Lions. They have always meant more to me than any other team. Lions tours are are far more intense than playing for England – they provide a stage on which you can find a place in history. They certainly provided me with a world stage on which to play a leading role after an uncompromising season (1996/97) with England in which I had had to play bit parts.

"I would like to see the Lions continue for ever, although it still intrigues me how a group of blokes touring a country for a couple of months can have such a tremendous time doing something so painful. They are a one-off, and there is no greater inspiration in the British and Irish game. The Lions concept breaks down barriers and preconceptions bewteen individuals and nationalities like nothing else."

"I said before the tour started that we were being badly underrated. Even given five or six differences of opinion over the best Lions starting line up, given our best XV against South Africa's XV there was no way I was ever going to accept that we were going to be beaten by anything like 20 points a game or three Tests to nil. I couldn't believe how pessimistic people were being about our prospects. We achieved what we set out to do and proived the doubters wrong.

"The Lions have provided most of my best moments in rugby, but that 1997 tour will always have pride of place. Nothing I could ever do will match the achievement of that tour, even if you rolled up all the Grand Slams, cup finals and league titles into one."

The 1997 Lions achieved a remarkable series victory over the Springboks

On the series-winning drop goal in 1997

"The moment is frozen in time in my memory. Probably because freezing was what was most on my mind. As the ball drifted towards me through the arc of the floodlights everything seemd to happen in slow-motion. I prayed it wouldn't miss. I prayed it wouldn't be charged down. The sense of elation I felt when I eventually looked up and saw the drop soar between the posts will stay with me forever."

On the day after the night before

"There was a three-word entry in my diary for Sunday, June 29 (the day after the second Test in 1997): 'Just a blur'. But I know that throughout the blur there was a fixed smile on my face which said that life couldn't get much better."

"Geech is one of those guys you can't help but like. He's got no airs and graces – he's big enough to take a ribbing – and he's got the respect of the players as both a coach and a former player."

"Martin Johnson was my sort of captain. He was a good communicator within the squad and, although he didn't talk all the time, what he said made sense. I'm one of those people who is inspired more by deeds than words, and Johnno is one of those types who, if he said 'follow me', you would."