One of the stars of the recent Lions tour of South Africa could be forced to miss next month's autumn internationals due to an ankle injury. [more] 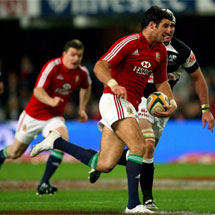 One of the stars of the recent Lions tour of South Africa could be forced to miss next month’s autumn internationals due to an ankle injury.

Wales scrum-half Mike Phillips played in all three Tests against the Springboks this summer but is now a doubt for his country’s autumn games with New Zealand, Samoa, Argentina and Australia.

The 27-year-old left the field after just over half-an-hour of the Ospreys’ Heineken Cup win over Clermont Auvergne yesterday afternoon, with his regional coach unsure how long he could face on the sidelines.

"We don’t know if it is bone or ligament damage yet,” said Sean Holley, after the Ospreys held on for a 25-24 victory at the Liberty Stadium.

“It’s too early to say what the extent of the injury is yet. He tried to carry on, but clearly it wasn’t responding, so he had to come off.

“Mike will be reviewed by our physiotherapists then by the surgeons.

“It’s been decided he should go for a scan and we will go on from there. We will have to wait and see…but the fact he tried to continue is encouraging news for us.”