England have been forced to reshuffle their Elite Player Squad ahead of next month's internationals after they were hit by a raft of injuries. [more] 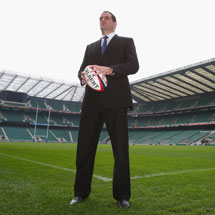 England have been forced to reshuffle their Elite Player Squad ahead of next month’s internationals after they were hit by a raft of injuries.

Team manager Martin Johnson has lost the services of an almost endless list of possible starters, with six recent Lions tourists among the most talked-about absentees.

Their enforced absence leaves Johnson with just four players who toured South Africa with the Lions in his latest squad, with forwards Tom Croft, Tim Payne and Joe Worsley joined by wing Ugo Monye in his much-changed 32-man party.

Julian White, a Test Lion against the All Blacks four years ago, was one of the latest to miss out through an injury he picked up last weekend after he had been touted for an international recall.

There is a still a large Lions contingent among Johnson’s chosen squad, however, albeit from that 2005 tour rather than 2009 equivalent.

James Haskell returns to the first-team squad after his move to France, while Sale scrum-half Richard Wigglesworth, Brive fly-half Andy Goode and Harlequins wing David Strettle are given another chance to impress.

"We’ve had to make a number of changes to the senior squad because of injuries but we have strength in depth,” said former Lions skipper Johnson.

“The whole squad is looking forward to three very tough games in November…and each of the players coming in has the opportunity to push themselves into contention for the first match against Australia."