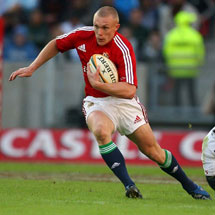 The Irish youngster, who was just 21 at the time of the tour of South Africa, produced some impressive rugby for Britain and Ireland’s elite, but not during his first outing in Lions colours.

Earls didn’t get off to the best of starts in the unconvincing win over a Royal XV in Phokeng, with a number of early handling errors blighting a dream day for the Munster utility back.

"I read a magazine before we played the first game and it was about errors in Lions selection and it was talking about me and Alan Quinlan,” said Earls, who only made his Ireland debut against Canada in November 2008.

“I went out trying to prove him wrong, and trying to score every time I touched the ball or trying to do something spectacular instead of just easing myself into the game, and obviously it didn't go my way.

"I beat myself up for one or two days after it.”

Earls also explained that he was in a similar position prior to his second match against the Cheetahs before a well-taken try saw him grow in confidence.

And unsurprisingly, Earls says he no longer reads the local or national media, instead preferring to focus on the advice of champion golfer Pádraig Harrington and fellow 2009 Lion Rob Kearney by just focusing on enjoying his rugby.

"I was really nervous before the second game as well,” Earls told the Irish Times.

“I'm always thinking negatively and I struggled with confidence back then, but it was good. I got my first touch, went into a ruck and got it back, and then the try – James Hook's lovely kick and catch and gather. My confidence built up after that.

"I don't read (newspapers) now really any more. It's something that Pádraig Harrington said to us when he came in last year. He read something when he was 18 and it just got to him, and he just gave up reading papers.

"It was brilliant hearing it from Rob Kearney – someone nearly my own age – and how confident he is and I just learned to relax, it's only a game of rugby.

“It is the Lions, but I just had to play like it was Thomond under-age and just enjoy it."

And enjoy it he did. Earls relished his first experience of a Lions tour, especially as the chance to shine was such an unexpected one considering his rapid rise through the ranks.

Munster and Ireland can now expect to see a more confident, more self-assured and more deadly Earls thanks to his time with Four Nations elite.

"Obviously I had my ups and downs, but overall I think it was a brilliant experience for me mentally more than anything.

“I'm more confident now and I can relax before games. I learnt a lot mentally from that tour.

“I just want to go out and play the games in the same way I have been since I was eight years of age, And off-the-pitch too. Positive thinking makes you happy and healthy, and that's what I'm trying to do in the last couple of months."