Russell Robins was an ever-present during the Lions' four-match Test series in South Africa 53 years ago. [more] 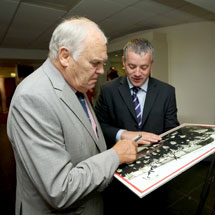 Russell Robins was an ever-present during the Lions’ four-match Test series in South Africa 53 years ago.

The Wales and Pontypridd back row earned Lions selection as a 23-year-old, just two years after making his international debut in 1953.

By playing in 17 of the 24 tour matches, Robins appeared in more games than any other Lion during the arduous three-month tour.

A talented ball player who enjoyed the physical aspects of the sport, Robbins excelled against the physical challenge presented by the Springboks and other South African opposition.

He faced the challenge head on, playing arguably the best rugby of his union career as the Lions came close to recording their first series victory over the Boks since 1896.

By the time the Lions made their next trip to the Southern hemisphere in 1959, Robins was in the form of his life. Unfortunately for tour captain Ronnie Dawson and the Lions committee, Robins was no longer available for selection. He had since moved north to try his hand at the 13-a-side version of the game with the Leeds Rugby League Club.