Lions stand out in a knight’s career

Sir Ian McGeechan has highlighted three Lions series victories among his career highlights after being awarded a knighthood in the New Year's Honours list. [more] 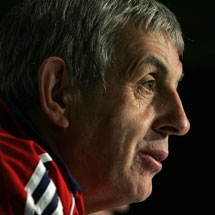 Sir Ian McGeechan has highlighted three Lions series victories among his career highlights after being awarded a knighthood in the New Year’s Honours list.

The man known to many as ‘Mr Lions’ toured twice with Britain and Ireland’s elite as a player before taking part in a further five tours as a coach.

The 63-year-old first represented the Lions in 1974, playing in all four Tests as the tourists humbled the Springboks in a truly sensational series.

McGeechan again started all four internationals as the Lions ran the All Blacks close three years later but it is his record as a coach that has seen him establish himself as arguably the most greatest Lion of all time.

The former Scotland centre led the Lions to a series victory over Australia in 1989 – the first time the Lions had come back from 1-0 down to win a three-match rubber.

He then came close to achieving a similar feat in New Zealand in 1993 before guiding the Lions to another historic series triumph in South Africa four years later.

McGeechan wasn’t involved with the Lions in 2001 but he did return to the set up for the 2005 tour of New Zealand where he took responsibility for coaching the midweek side that went through the full tour unbeaten.

His latest involvement with the world’s most-famous touring team came last summer when the 2009 Lions produced a heroic effort in falling just short against the World Champion Boks.

And although McGeechan has stated that the recent South African adventure ranks high on his list of achievements, unsurprisingly, it is victories that stand out when he is asked to name his favourite rugby memories to date.

"Obviously as a player getting your first international cap for Scotland and obviously the Lions in 1974 as a player and then having the opportunity to coach Scotland were definite highlights" McGeechan, told BBC Radio.

"Later, winning the Grand Slam in 1990 again was something which was exceptional and winning the Lions Test series in ’89 and ’97 stand out.”

Fortunately for Lions supporters across Britain and Ireland, being given the ultimate accolade isn’t likely to persuade McGeechan to call time on an illustrious career.

Instead, he has admitted that the desire to succeed still burns brightly and that he has no intention of bringing his association with the Lions to an end with a series loss as his last memory.

"If it suits the Lions Board, I’m very keen to be involved in the planning for Australia in 2013," said McGeechan.

"Getting the pre-tour stuff right is vital. We had to battle against that in South Africa. It’s in everybody’s interest that the Lions are competitive. That means the build up itinerary has to be spot on, so too the calibre of opponent.

"I’d like to have an involvement using my experience to try to make the preparation as good as it could possibly be so that the head coach, whoever that may be, has something to build on."