No Happy New Year for White

Former Lions tourist Jason White has had little cause to celebrate the New Year. [more] 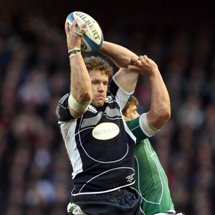 Former Lions tourist Jason White has had little cause to celebrate the New Year.

The Scotland back row began 2010 in the worst possible fashion as he suffered a serious injury on January 1.

White, who was called up as a replacement on the Lions’ tour of New Zealand five years ago, broke his leg during training with French side Clermont Auvergne.

The 31-year-old had been preparing for the Top 14 clash with Toulon but is now expected to be out of action for a minimum of three months.

White has already undergone surgery to repair a fractured tibia but will now miss the entire Six Nations campaign, which begins when Scotland face France at Murrayfield on February 7 and ends when they travel to Ireland on March 20.

Although the 77-times capped international has not secured a starting berth under new Scotland coach Andy Robinson, he has still been a key member of the matchday 22 and his absence will be a huge blow as the Scots look to improve on last season’s solitary Six Nations victory.