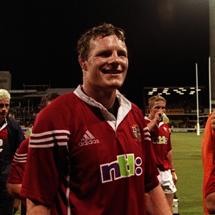 Former Lions tourist Malcolm O’Kelly says he is considering playing on next season despite previous rumours that he may be ready to hang up his boots.

The veteran second row has been one of the Leinsters’s most-consistent performers since making his debut back in 1995 and he would be sorely missed if he did decide to announce his retirement at the end of the current season.

But the 35-year-old, who toured Australia with the Lions in 2001, has made it clear that a decision on his future is yet to be made and that there is every chance that he will carry on playing for at least another season.

"I haven’t made a decision yet. I’m still only 35,” O’Kelly told the Irish Independent.

“I was talking to Danny Grewcock recently, and he is considering playing on another year, and he is 38.

“It’s hard to know. It’s a personal thing, and you can’t look at one player and say, ‘Oh then Mal will stay on another three years’.

"It’s (a decision) I’ll make with Leinster. I’m unlikely to go off and play elsewhere. We have a strong squad and it’s not easy to get into the team. Whether or not there will be a place for me next year is a different matter."

O’Kelly has made it clear that he will only continuing playing while he is still enjoying doing so – something that isn’t currently in doubt.

He does admit that things are getting harder as age catches up with him but the atmosphere within the Leinster squad is huge motivational factor when it comes to carrying on.

"It’s an ongoing battle, I’m not going to lie to you,” added O’Kelly, who was also selected for the 2005 Lions tour of New Zealand before injury forced him to withdraw without playing a game.

"The coaches will make allowances. Our strength and conditioning guy, if I say to him, ‘My knees are in bits today, I just can’t do it’, he’ll say, ‘Get into the pool’.

"There are certain allowances they will make. You get so many knocks, and the engine has been going for a long time, so sometimes you need a breather.

“I love the comforts of home, but this is just such a great environment at the moment. The atmosphere in the squad is absolutely fantastic, even when you’re going out training in that sh**e!

"You value these times. You value the friendships you make with the guys in the squad, and I would hate the thought of losing that. And you do. Once you leave, the guys are too busy, too engrossed in what they are doing. I don’t want to finish."