One of the more controversial figures from the Lions' summer tour of South Africa has been handed added responsibility ahead of the new Super 14 season. [more] 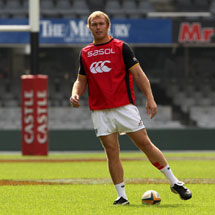 One of the more controversial figures from the Lions’ summer tour of South Africa has been handed added responsibility ahead of the new Super 14 season.

Burger only received a yellow card at the time of the incident in a game which the World Champions went on to win 28-25.

The 26-year-old has since played a central role in the Boks’ Tri Nations success and will now be placed under even greater media scrutiny after being named as Stormers captain when the new southern hemisphere season kicks off next month.

But despite recent publicity regarding his physical approach to the game, Burger insists the captaincy will not change his playing style.

"My style of captaincy is to lead by example," Burger told the Cape Times.

"I’ll be playing the way I have always played and will not change.

“But obviously with the captaincy comes an added responsibility, it will be foolish not to think so.”

Burger will skipper a side that includes new signings Jaque Fourie and Bryan Habana as the Stormers look to overtake the Bulls and the Sharks as South Africa’s leading Super 14 franchise.