Lion would start from scratch

Ospreys coach Sean Holley believes 2005 Lion Gavin Henson may well make a comeback but he admits that his star centre would have to start from scratch. [more] 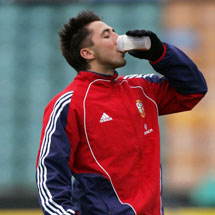 Ospreys coach Sean Holley believes 2005 Lion Gavin Henson may well make a comeback but he admits that his star centre would have to start from scratch.

Henson has been on unpaid leave since April as he attempts to recover from a spate of injuries that have blighted his career in recent seasons.

The 27-year-old was regarded as one of the game’s leading lights when he helped Wales to Grand Slam glory back in 2005.

The Pencoed product toured New Zealand with the Lions that same year but injuries have limited his game time ever since.

There has been no official confirmation on whether Henson will return to the sport and Holley admits that, even if the double Grand Slam winner does make an imminent comeback, there is no guarantee that he will instantly regain his form of old.

"He would be able to get his weight back on and his fitness up to scratch, but after that, who knows?" said Holley, who went on to compare Henson’s situation to that of fellow Welsh international Leigh Davies.

"I remember when we signed Leigh Davies in 2005.

"He had taken a year out of the game, and while he was able to get his fitness and conditioning back to where they were, he struggled to get to grips with the way rugby had moved on even in the relatively short time he had been out and it did not work for him.

"I am not saying that would be the case with Gavin… in terms of natural talent he is as good as anyone, but he will almost be starting from scratch again."

Talk of a possible return date later this season has been doing the rounds in national newspapers and Ospreys managing director Mike Cuddy has made it clear that he would be delighted if Henson returned to the Magners League outfit in the near future.

Cuddy intends to hold talks with Henson sometime next month with a view to seeing if one of the region’s star names will return in time for what could be a busy end-of-season run-in.

"I’m in regular contact with him and the two of us will sit down in early February, once the Heineken Cup qualification games are out of the way," said Cuddy.

"A lot of things have been said about Gavin and most of them are nonsense.

"Of course, he’s been sorely missed. Any team in the world would miss a player of Gavin’s quality. We’ll have a chat and see what comes of it."