England have selected 12 Lions in their 2010 Six Nations squad. [more] 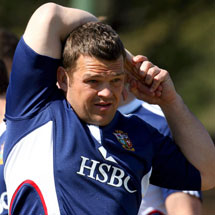 England have selected 12 Lions in their 2010 Six Nations squad.

Former Lions skipper and now England team manager Martin Johnson has chosen eight players who toured with the Lions in 2009, plus four more from 2005.

Mears, Sheridan, Ellis, Flutey and White all missed the entire autumn series through injury, with Shaw also absent for the first two fixtures before returning for the final Test against New Zealand.

As injury concerns still surround both Vickery and White, Johnson will make a final decision on their inclusion on January 25.

Fellow Lion Joe Worsley, along with Gloucester centre Mike Tindall, is not included in the party but his fitness will be monitored and he could be recalled before or during the tournament.

Ashton currently tops the Guinness Premiership tryscoring charts for high-flying Northampton, while ex-New Zealand Rugby League international Hape has been one of only a few bright sparks in a lacklustre Bath side.

There is no place in the senior squad for Wasps’ starlet Danny Cipriani or centres Shane Geraghty and Ayoola Erinle who both featured at Twickenham in November.