Loosehead prop Phil Orr was twice a Lion during an era when the tourists could boast a pack of forwards who could more than compete with the giants of All Black and Springbok rugby. [more] 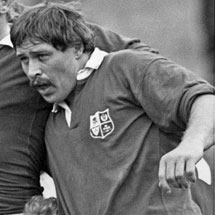 Loosehead prop Phil Orr was twice a Lion during an era when the tourists could boast a pack of forwards who could more than compete with the giants of All Black and Springbok rugby.

The Irish international first appeared in Lions colours on the 1977 tour of New Zealand, playing in his one and only Test during the 16-12 defeat in Wellington.

He was one of just four Irishmen to play for the Lions in '77, with the others being Willie Duggan, Mike Gibson and Moss Keane.

Orr played a total of 11 fixtures on his first Lions tour, before playing a further five after being called up as a replacement midway through the tour of South Africa three years later.

Twice a Triple Crown winner in 1982 and 1985, he won a total of 58 caps for his country and was at one stage the world's most-capped prop.

He made himself unavailable for the 1983 Lions tour to New Zealand due to business reasons but he returned to the same country to take part in the inaugural World Cup in 1987.

He featured as a player for the Old Wesley club for more than two decades and was the club's president during their centenary year in 1991. He continues to be involved in the sport and is currently the manager of the Ireland U-20s squad.

"The Lions tour was a huge honour. It was remarkable – a real adventure to be selected for a Lions tour, especially my first tour which was the 1977 tour when we assembled some time in early May in London and we were away for virtually three-and-a-half months. We played 26 matches and it was great to meet all the guys you played against. To bond as team was smashing.

"The pack were just superb. At the end, our scrummaging was second to none. I got picked for the first Test and that was the only Test I played. In the first month, I actually played twice as many games as I did in the next two months. I joined the Wednesday team but the Wednesday team were very successful anyway.

"It was a hard, hard tour. Unfortunately, the weather went against us. It rained a lot and, because we didn't win the Test series, it looked like a failure, but I enjoyed it and we had some great results."

On coming back from the Lions a changed man

"I was a lot heavier, having eating two dinners twice a day, which was a problem! I found when I came back I was tired but I was allowed to take a rest – we didn't look at conditioning the way they do nowadays.

"I found you were just so much more professional in the way you behaved and how you looked at the whole thing. It was professionalism before its time and that's what a Lions tour does."

Orr (third from left) during the famous mudbath match of 1977

"The one thing about the final game, and I'll never forget it, is that, instead of trying to take us on in the scrum, New Zealand just put three forwards in the scrum and opted out of the scrum.

"That was a huge embarrassment to New Zealand. I saw that as capitulation, I really did. In fairness, they still won the Test 10-9 but I though it was an embarrassment for New Zealand to opt out."

On a special team spirit

"I can't remember any friction, I really can't. And that's what a Lions tour is all about.

"If you look here in Ireland, guys get together from the four provinces and play together, and the Lions is an extension of that. Once you've moved on from your Irish context to the Lions set up, it's just like another team.

"It's in our nature that, once you put on the jersey, you're there to die for them."