Australia's four Super 14 sides have been told they must 'entertain' as well as win during this year's tournament. [more] 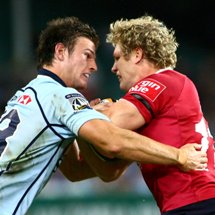 Australia’s four Super 14 sides have been told they must ‘entertain’ as well as win during this year’s tournament.

Australia host the Lions in three years time amid fears that the game is losing ground on other sporting interest in the country.

Australian Rugby Union boss John O’Neill has publicly stated that the game has hit ‘rock bottom’ following a disappointing 2009, with Australian Rules and rugby league pulling further away from union in terms of popularity and soccer now threatening to become the nation’s third sport.

"The message had to be inescapable: ‘Do you want this to continue, because where do you think we are going end up? Broke? Struggling as the fourth ranked code?’," said O’Neill said.

"The reality of it set in. We have hit the bottom and every one of the four teams is determined to deliver winning and entertaining rugby."

Not one of the country’s four sides made the play offs in last season’s competition, while the Wallabies themselves registered only one win in the Tri Nations before suffering a humiliating first loss to Scotland in 27 years.

And O’Neil has now put pressure on the ACT Brumbies, New South Wales Waratahs, Queensland Reds and Western Force to heighten interest in the game by producing the kind of rugby that will get supporters flooding back to union rather than looking for alternatives elsewhere.

"Winning and entertaining are not mutually exclusive. They are in the same envelope," added O’Neill.

"Winning is critical, but if they win in style, that’s the bonus. I have trouble understanding a coach saying, ‘Our job is not to entertain, our job is just to win’.

"The nature of mass entertainment sport, which is what we are, is the word ‘entertainment’. It doesn’t mean you throw caution to the wind and become cavalier about it … [but] they sit very comfortably together."