A pair of Lions are expected to return to the Leicester Tigers line up this weekend. [more] 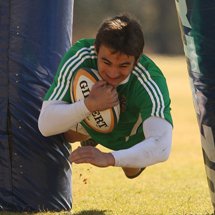 A pair of Lions are expected to return to the Leicester Tigers line up this weekend.

Geordan Murphy and Harry Ellis have both been absent with injury for large parts of the season but should feature in the LV= Cup clash with Bath on Friday night.

Tigers club captain Murphy has missed the last four months after he required surgery on a dislocated shoulder.

The 2005 Lions tourist picked up the injury at The Rec on September 28 and has missed a host of Guinness Premiership games, as well as Leicester’s entire Heineken Cup campaign.

Ellis, who toured South Africa with Britain and Ireland’s elite last summer, has been struggling with a knee injury that threatens to limit his involvement in the forthcoming Six Nations.

The England scrum-half hasn’t started a first-team game since facing Newcastle at Welford Road back in September.

Having returned from his first Lions tour with his reputation enhanced thanks to a series of fine performances, Ellis missed his country’s three autumn internationals after suffering reoccurring problems with the knee he originally damaged in May 2007.

"Billy Twelvetrees and Lucas Amorosino will all play, Julian White will start and Murphy will be on the bench.

"We will put a very good side out and it’s a completely different side to the one which started last Saturday.”