BOD has ‘more to give’

Lions legend Brian O'Driscoll insists he still has plenty more to give as he prepares for what should be an enthralling few months with both club and country. [more] 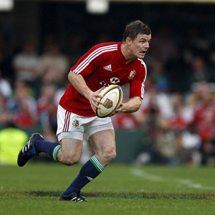 Lions legend Brian O’Driscoll insists he still has plenty more to give as he prepares for what should be an enthralling few months with both club and country.

The 31-year-old centre is preparing to lead Ireland in the defence of their Six Nations Grand Slam, before returning to his province for a Magners League and Heineken Cup run in that could see Leinster claim an historic domestic and European double.

And despite having been at the top of the game for more than a decade now, rugby fans should be fortunate enough to be able to watch O’Driscoll do his stuff for a few more years to come.

”I still have more to give. I have seen players leave well before their time and I would hate to do that. So why bother with an end date?” said O’Driscoll ahead of Ireland’s Six Nations opener against Italy on Saturday.

”I have ambitions to set records which will be hard to chase down, like getting more than 100 caps for Ireland.”

If all goes to plan, that century of Irish caps should be reached against Wales at Croke Park on March 13.

By then Ireland will have already played Italy, France and England as they chase a second clean sweep in as many seasons having ended a 61-year wait 11 months ago.

But despite his vast experience and Ireland’s recent success, O’Driscoll admits that he will still be engulfed by butterflies in the lead up to each of this year’s Six Nations ties – just as he was when he made the final preparations for his first international against the Wallabies back in 1999.

”I was really looking forward to my first cap and didn’t start feeling nervous until the fireworks went off when Australia came onto the pitch,” added O’Driscoll.

”I wasn’t expecting that. Once the whistle went for the start of the game all those nerves evaporated.
”I still have those nerves – if you don’t the mind isn’t sharp.
”You need to be forcing your food down. The butterflies focus the mind and get you ready for combat.”

When Ireland line up against the Azzurri at Croke Park this weekend, O’Driscoll’s role as national captain ensures it is he who will lead his troops into that highly-charged combat which he so aptly describes.

When it comes to the Magners League, O’Driscoll plays a starring role for 2008 Champions Leinster but the position of skipper is left in the more-than-capable hands of veteran lock Leo Cullen.

It is a situation that suits O’Driscoll, allowing him time to breathe, to concentrate on his own game and on national responsibilities while Cullen deals with the day-in, day-out matters of provincial leadership.

But while O’Driscoll is quick to acknowledge that there are plenty of natural leaders in the Ireland set up, he does hint that he would be mightly disappointed if the role was given to one of his colleagues.

”We’re in the fortunate position of having a lot of great leaders around so the workload is shared. But it would be strange to be playing in an Ireland international and not be captain,” explained O’Driscoll, who captained the Lions on their 2005 tour of New Zealand.

‘Keith Wood was the last Irish captain I played under and that feels like an eternity ago.

”I enjoy it as much now as I did in the early days, though it probably comes more naturally to me now."