Double Lions tourist Shane Williams is backing one of his team-mates from the 2009 tour of South Africa to shine for Wales this weekend, despite being selected out of position. [more] 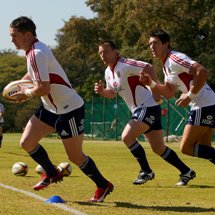 Double Lions tourist Shane Williams is backing one of his team-mates from the 2009 tour of South Africa to shine for Wales this weekend, despite being selected out of position.

Wales and Lions coach Warren Gatland has named James Hook at outside centre for Saturday’s Six Nations opener against England and Williams believes his Ospreys colleague will shine in his new role.

Hook, who was a pre-tour replacement for the 2009 Lions, has played fly-half, inside centre and full back for his country but has never worn the No13 shirt in international competition.

But that doesn’t worry Williams as Wales begin their search for a third Grand Slam in six years.

"You can put James anywhere on the field," said Williams, who toured with the Lions in 2005 and 2009, scoring a brace of tries in the Third-Test win over the Springboks last summer.

“He was almost thrown onto the field at 15 during the autumn and was probably our best player of the series.

"He’s a tremendous player and one of the most naturally gifted players I’ve ever played alongside. He can create something out of nothing.

"I’m looking forward to playing outside him on the wing. He’s never let the side down before and I know he will do a job for us."

Williams is known for his immensely quick feet and ability to create something from nothing but the 32-year-old admits that England have plenty of players with similar ability in their starting XV.

And former IRB World Player of the Year Williams is therefore expecting to have be at his best defensively if Wales are to contain a ‘new look’ England.

"England have selected a lot of quick players in the backline. In fact, they have some of the quickest in world rugby," added Williams.

"I’m sure they will be intent on running with the ball and scoring tries. We’re expecting a really tough battle. But a lot will depend how the forwards play.

"England have a strong and physical pack and will aim to earn the right to get the ball wide and put the speed merchants in behind.

"You can’t be one-dimensional and I’m sure they will try to use all their traits and weapons to break us down. But we’ll be ready."