Robbo wants Scots to raise the roof in Cardiff

Former British & Irish Lions tourists and coach Andy Robinson insists his Chris Cusiter led Scottish side will take any kind of win in their RBS 6 Nations clash with Wales this weekend. [more] 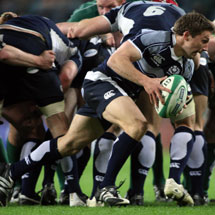 Former British & Irish Lions tourists and coach Andy Robinson insists his Chris Cusiter led Scottish side will take any kind of win in their RBS 6 Nations clash with Wales this weekend.

Scotland have won just one away championship tie in their last 17 fixtures – to Italy in 2006 – and have only beaten Wales once at the Millennium Stadium in the past decade.

But head coach Robinson insists the visitors, who have scored just four tries in their last six 6 Nations matches, will take a victory at all costs.

"We are always striving to score tries but if we win 15-6 without scoring one then I will be happy. We’re away from home and haven’t won in Cardiff in 2002," said Robinson .

"Wales are a top side and we will respect them. But we are focussed on what we have to do."

The game will be played with the Millennium Stadium roof wide open following a week of angry exchanges between Robinson and his Welsh coutner part Warren Gatland. The Scottish coach made it clear as early as Tuesday that the Scots wanted the roof open regardless of the conditions.

Gatland slammed his opposite number’s demand to have the roof open despite the expected poor weather conditions. And Robinson admited in Cardiff he doesn’t care about what the fans think about his decision.

"We don’t have a responsibility to entertain the supporters – we just have to win. I can’t control what Warren Gatland says but the pitch looks in cracking condition and it’s great to see the sun shining on the grass," he said.

"It’s a fantastic stadium and with the sun out, it looks even more impressive. We have prepared well and we’re looking forward to the game."