Lions centre Gordon D'Arcy has described Ireland's defeat to France as a 'reality check', although he believes the Six Nations title is still up for grabs. [more] 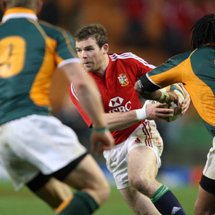 Lions centre Gordon D’Arcy has described Ireland’s defeat to France as a ‘reality check’, although he believes the Six Nations title is still up for grabs.

The disappointing reverse has now put paid to Ireland’s hopes of claiming a second successive Grand Slam and D’Arcy admits that he and his team-mates were below par in the French capital.

"A reality check, a kick in the ass – you can put 100 different names on that result," said D’Arcy, who started at inside centre at the Stade de France before an injury to fellow Lion Rob Kearney saw him switch to the wing.

"We got right a lot of things that we did wrong against Italy last weekend, but were slack in other areas.

"We probably made the highest number of unforced errors in a long time. Little errors accumulated.

"Last week we let Italy out of their 22 cheaply and we did the same against France. The difference is France can shift and put pace on the ball.

"We can do better than this but we shot ourselves in the foot."

Ireland did at least start brightly as they looked to improve on a shaky 29-11 win over the Italians in Round 1 but they failed to make the most of their early opportunities and eventually paid the ultimate price.

If possession had been turned into points in the opening stages, it might have been a different story.

"We were all upright and they had their hands on their knees, but we just didn’t capitalise and then the error rate started increasing.

"We had them under pressure and they were beginning to creak but then we let them out of it."

But while D’Arcy is under no illusions as to the size of the challenge and the potential criticism that will come the side’s way this week, he remains hopeful that the Triple Crown and Six Nations title could still be in Ireland’s possession come the end of the campaign.

"We know what we have to do now and next week will be a fairly honest week, to say the least. We’ve got to roll with the punches.

"But the great thing about sport is that next week is a clean slate, so as long as you’re selected you get the chance to make up for it.

"The championship is still open. All we can do now is try and win our remaining games while hoping somebody nicks one against France.