Wales coach Warren Gatland has suggested that drinking alcohol after international games will only take place within the Welsh camp itself, if at all. [more] 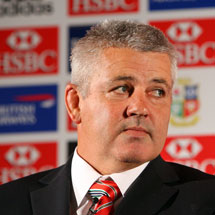 Wales coach Warren Gatland has suggested that drinking alcohol after international games will only take place within the Welsh camp itself, if at all.

Gatland, who was part of the Lions coaching staff last summer, recently removed Andy Powell from the Wales squad after a breach of discipline.

Powell, who also toured South Africa with the Lions, was arrested on suspicion of drink driving after being found in possession of a golf buggy at a service station off the M4 following the Six Nations win over Scotland.

And Gatland, who is known for his no-nonsense approach, has admitted that things may have to change to ensure a similar incident never happens again during his tenure.

"We played England [and] decided there was no alcohol after that game, came straight back to the hotel and, after Scotland, we said were having a few days off – we wanted the guys to go and be able to have a couple of drinks," said Gatland.

"We have got to make sure again, if they want drinks, it’s how we do it… one or two drinks here [the team hotel] …just keep it in-house. We have got to keep stressing that we are trying to make these players responsible and mature.

"I think we have all realised that things have changed in modern, professional sport. We have got to make sure players are disciplined off the field as well.”

Wales take on France at the Millennium Stadium this Friday as they look to make it two wins from three after defeat to England and their last-gasp victory over the Scots.

France arrive in Cardiff with their Grand Slam hopes still very much alive after a comprehensive win over reigning champions Ireland last time out.

But despite France’s impressive form, Gatland has pointed to their traditionally inconsistent performances, particularly away from home as he searches for a second Championship triumph in three seasons.

“They are a good all-round side, big and physical, with two big midfielders [Mathieu Bastareaud and Yannick Jauzion] and are quick on the outside," Gatland told Wales on Sunday.

"France are a tough team to beat but nothing changes. You don’t know what French team is going to turn up really. That’s always the question.”

"Last year they had a couple of good wins, beat us at Stade de France, did a lap of honour and the following game, against England at Twickenham, they were absolutely woeful."