Mike Phillips made his long awaited comeback from injury on Sunday afternoon. [more] 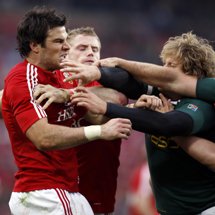 Mike Phillips made his long awaited comeback from injury on Sunday afternoon.

One of the stars of the 2009 Lions tour of South Africa, Phillips has been out of action since October.

The 27-year-old damaged ankle ligaments in the Ospreys’ Heineken Cup win over Clermont Auvergne and has missed a host of important matches for club and country in the four months that have followed.

As well as being absent for the final four rounds of the Ospreys’ European action and the majority of the Magners League campaign to date, Phillips has also been unavailable for Wales’ autumn internationals against New Zealand, Samoa, Argentina and Australia and the Six Nations games with England and Scotland.

But the man who started all three Tests for the Lions against the Springboks in June and July last year finally returned with a substitute appearance in the Ospreys’ narrow win over Connacht yesterday.

And, although Phillips admits he now has to prove himself all over again, he has already targeted a place in the Wales squad prior to the end of the Six Nations.

“I have been training really hard and the ankle feels fine,” said Phillips.

“It’s not my decision to make (a Wales call up) but I have worked really hard with the Ospreys and on my own. I have put the hours in to get back.

“It would be great to be back in the squad, but that’s out of my hands. I just have to wait and see. It has been frustrating because everybody wants to play for Wales and you want to be out there playing.

“I have missed a fair few games and I had put myself in a good position after the Lions tour in regards to world rugby.

“I wanted to carry that on with Wales and if I get back into the squad before the end of the Six Nations that would be great.”