Former Lions tourist Brian Moore could be stepping back on to the field of play 15 years after his retirement. [more] 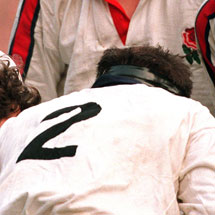 Former Lions tourist Brian Moore could be stepping back on to the field of play 15 years after his retirement.

The England hooker, who toured twice with the Lions, has qualified as a referee.

Moore has been an outspoken critic of refereeing performances in his role as a pundit with the BBC but he has now decided to experience life with the whistle.

"I’d got into an argument over the refereeing of the front row," said Moore, who won five Test caps for the Lions in 1989 and 1993.

"I reckoned I’d been a hooker in over 75,000 scrums during my career so I knew what I was talking about.

"Then the questioner asked how many front rows I’d ever refereed, and he suggested I take the ELRA course to find out what it was like. So I thought ‘yes, I’ll do it’."

Moore has now passed the Rugby Football Union’s Entry Level Referee Award (ELRA) and he insists he intends to use the qualification to get even more involved with the sport he loves.

The 48-year-old ex-England international was impressed with what he saw during his training and hopes other former players will take up the challenge.

"I think the course is good. They don’t expect you to learn the whole law book in one go; they encourage you to focus on how the laws are applied,” added Moore.

"I enjoyed it. I intend to carry on refereeing now that I’ve qualified and I’d recommend it to any ex-player who is a good communicator."