Lions lock Donncha O'Callaghan isn't taking any notice of the criticism being leveled at England ahead of Ireland's trip to Twickenham this weekend. [more] 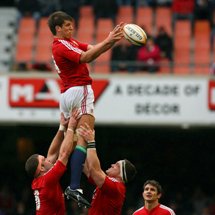 Lions lock Donncha O’Callaghan isn’t taking any notice of the criticism being leveled at England ahead of Ireland’s trip to Twickenham this weekend.

The former World Champions produced a below par performance in a narrow win over Italy a fortnight ago and have been written off as realistic Grand Slam contenders ever since.

But O’Callaghan himself hasn’t dismissed England’s chances of beating anyone and everyone on their day.

"They’ve been getting an awful time unfairly,” said O’Callaghan, who returns to the Ireland starting XV after a two-match absence.

“They’re not one dimensional at all. Just look at the quality of the broken-field runners they have.

"They have quality players who probably haven’t clicked as they would have liked, but when they do they can rip someone apart."

Ireland versus England is usually a particularly tasty encounter and O’Callaghan expects no different this Saturday.

The reigning Six Nations Champions are determined to bounce back following a disappointing defeat to France in Paris in Round 2 and beating England on their own patch would be the perfect way to respond.

“If there’s any game you can mentally put yourself to the wheel for, then England is definitely it,” added O’Callaghan, who has been on the last two Lions tour to New Zealand and South Africa.

"We can play England at any sport and everyone watching will want us to beat them. Rugby’s no different.

"Matches against them have been hugely physical in recent times. Granted we might know a few of them, but it’s still England and a massive game.”

Having sat out the opening two rounds of action through injury, O’Callaghan is itching to be back involved.

The jovial Munsterman admits he does not take kindly to watching rather than playing.

And although his critics may point to match fitness being a possible issue when he runs out at English Rugby’s HQ, O’Callaghan’s desire to return to representative rugby with his country is likely to far outweigh any such concerns.

“Seeing the lads run out the last two times was really tough,” said the 30-year-old.

“To be honest with you, I’ve been completely selfish these past three weeks, trying to get myself in the best condition as I could.

“I got a week (of warm weather training) in Lanzarote with Munster which was brilliant for me. (Munster’s strength and conditioning coach) Paul Darbyshire had me up boxing at seven in the morning and swimming at seven in the evening. I realised I’m no boxer and no swimmer so I’m glad to be back playing ball.

“I wouldn’t have said I ever took it for granted before but it just bangs home how much it means to you and how proud you are to run out with the Irish team.

“It’s all that matters to me. It’s everything.”