Jerry Flannery now knows the date of his appeal against a six-week suspension. [more] 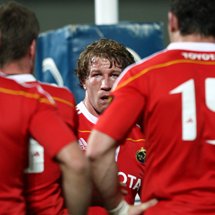 Jerry Flannery now knows the date of his appeal against a six-week suspension.

The Munster hooker was banned until March 29 after being found guilty of kicking France wing Alexis Palisson during his country’s 33-10 defeat in Paris last Saturday but decided to appeal the sanction earlier this week.

Flannery, who had been among the original 37-man Lions party to tour South Africa last summer, pleaded guilty prior to being sentenced and acknowledged that the offence deserved a red card at the time but he hopes to have the length of the suspension reduced.

The appeal will be heard on Wednesday of next week in London.

The Six Nations disciplinary officer has also launched a cross-appeal, meaning that Flannery’s ban could be extended if his own appeal fails.

The current length of the ban means Flannery will miss the remainder of Ireland’s defence of their Six Nations crown, as well as up to four Magners League games.