Mark Gasnier could be starring for the Wallabies by the time the Lions arrive Down Under in 2013. [more] 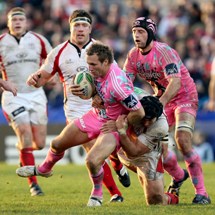 Mark Gasnier could be starring for the Wallabies by the time the Lions arrive Down Under in 2013.

The 6ft 4in wing is being tipped to win his first rugby union cap prior to next year’s World Cup after impressing since his move from rugby league.

Gasnier switched codes in 2008 and is now in his second season with French giants Stade Francais.

The 28-year-old was widely regarded as one of the world’s leading players in the 13-a-side version of the game, scoring 11 tries in 15 appearances for the Australian Kangaroos.

In 141 games for the St George Illawarra Dragons, Gasnier scored 81 tries, while he also represented New South Wales on nine occasions, scoring four tries in the State of Origin series.

His contract with the Parisians expires at the end of this season and ihe s currently being linked with a return home.

Gasnier is reported to have attracted interest from the Brumbies, Reds and new franchise the Melbourne Rebels, with Wallaby coach Deans confirming that the in-form Gasnier is on his agenda.

“Absolutely,” said Deans when asked if Gasnier could potentially force his way into World Cup calculations on the back of just one Super Rugby season.

“Anyone who plays and plays well has got a good chance.”

If Gasnier does line up against the Lions in three years’ time, he won’t be the first league convert to have featured in a Test series for Australia against Britain and Ireland’s elite.

Former St George, Sydney and Manly star Andrew Walker started all three internationals against the Lions in 2001 on the right wing, scoring a try and penalty in the first Test and famously kicking the ball dead to secure a series victory in the third and final encounter.